In Israel, marijuana was legalized for medical use in various conditions in the 1990s. The authorization of cannabis treatment for Parkinson disease (PD) was prompted by Israeli media reports of dramatic improvement of tremor in 1 patient and amelioration of symptoms in others.

In conclusion, this observational study is the first to report an amelioration of both motor and non–motor symptoms in patients with PD treated with cannabis (medical marijuana).

What’s most fascinating about this study is not in its description of increased freedom of movement, which is very preliminary.

The most important line in the paper describing this study is a brief one buried in its technical details. As they make the case for why their study is important, the investigators mention anecdotal evidence that marijuana might help with symptoms of Parkinson’s. Specifically, they cite “media reports.”

That caught my attention because the person responsible for those media reports is Zach Klein, the filmmaker in Tel Aviv who had administered medical marijuana to nursing home residents. In a scene from his marijuana documentary, a man who has suffered from Parkinson’s for years can finally write his name. That emblematic image became the cornerstone of the film, and it also prompted these researchers to organize a study that produced results that were published in a legitimate medical journal.

The fact that those researchers found the inspiration for a study in a film isn’t just life imitating art. It’s part of a broader theme of scientists imitating people. It’s crowdsourced science.

Fron the Book: “Stoned: A Doctor’s Case for Medical Marijuana” 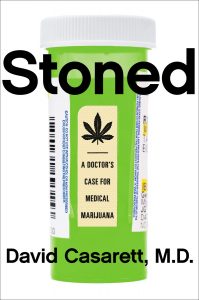